The Problem with LinkedIn's Skills Endorsement

A while ago LinkedIn introduced what looked like a really cool feature, an easy way to “endorse” skills of your contacts. It’s really easy to go in and click “Endorse” on a bunch of skills. However, one thing that kept surprising me was who endorsed what skills. For example, just today I had a ex-coworker from over 4 years ago endorse me for Hibernate. Which by itself is a nice gesture, only thing is, he’s an art director. I don’t want to be pretentious, but I would believe that he knows as much about Hibernate as I know about Photoshop filters or fine arts. As a matter of fact, I usually get yelled at for my choices of colour. If he would have endorsed me for “Teamwork” or “Attention to Detail” or something like that, I would agree that it is an accurate representation of my skills. But getting endorsed for my Java ORM skills by a designer doesn’t constitute valuable feedback.

The other surprise is what people endorse me for. There seems to be a disconnect between what I actually do and what people think I do (which by itself is an entirely different discussion). Right now my number one endorsement is for jQuery. And while it’s true that I’ve used jQuery, that was years ago. I haven’t done any significant JavaScript development in any of my recent projects. For example, here are my most endorsed skills according to LinkedIn: 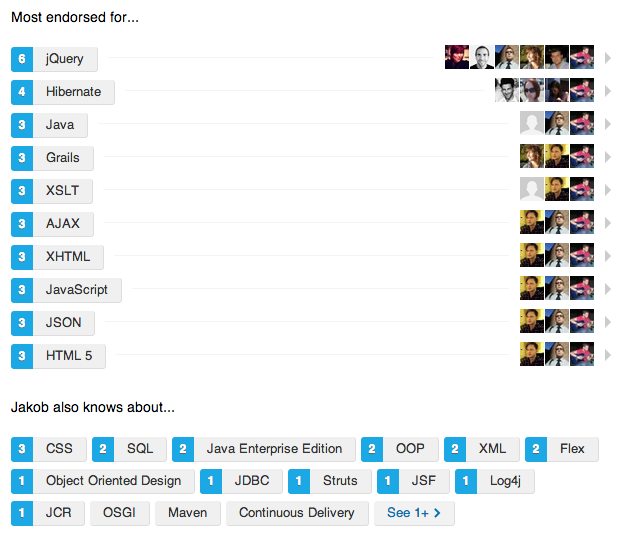 While it’s nice to get endorsed for all these skills, it paints the wrong picture. My strength is things like Java, Maven, Java Enterprise, OOP, JCR, etcetera. The list should be the other way round. My most endorsed skills should be everything under “Jakob also knows about…” and vice versa.

And finally there’s the problem that the endorsement is a binary statement. “This person knows XYZ!”. However, this doesn’t make a statement about how well this person knows XYZ. To go back to the jQuery example from above, I’m not terribly good with jQuery. I know how to use it and write some things with it, but on my resume it’s something I’d mention at then bottom of my skill list.

Overall I like the idea of easily “endorsing” skills and I think LinkedIn did a great job there. However, I think that LinkedIn should “weigh” endorsements based the person endorsing, almost like a network of trust. If I got endorsed by somebody for my XML skills, and that person himself has been endorsed for his/her XML skills, than this endorsement should be weighed more than the same endorsement by a person that has no endorsement for that. The result would be much more representative skill trees on LinkedIn profiles.